Virtual Organization Leadership: The Fascia of a New Global Civilization of Intelligent Beings 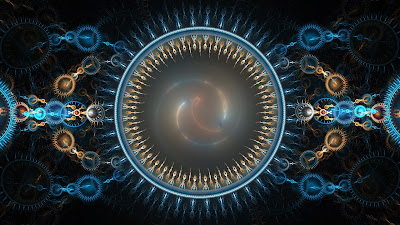 What is it about Virtual Organizations and, by extension, Virtual Organization Leadership, that make them so special and indispensable to the creation or advent of a New Global Civilization of Intelligent Beings which will be able to chart a course toward Human Evolution?

The Answer Is Very Simple and Crystal Clear

I could spend days and weeks and months going over the answer to that question, however, I will do my very best to keep it as simple as I possibly can.

The very brief and simple version of that answer is all of the following:

First and foremost, the preceding answer to the initial question about the crucial and indispensable role of virtual organizations really has very little to do with the technology component of virtual organizations for the simple reason that technology, in and of itself, cannot turn a bunch of primitive and barbaric savages ("PABS") into intelligent beings.  Technology can only make us much more efficient and effective on an exponential basis at whatever it is that we are now doing or have been doing since time immemorial - be it good or evil.  As well, it can only help to accentuate every single strand and fiber of our being.

On the other hand, from the receiving or opposite end of that spectrum, technology has also made it much easier for practically all members of the human race to fall victim to the worst forms of physical, emotional, mental and psychological abuse that human beings could possibly inflict on each other.  Technology has also made it easier for us to suffer from the lowest level of depredations and deprivations heretofore unimaginable; a state of affairs which could be relegated to the darkest chapter in human history.    Hence:  More dumbed down, yes.  More gullible, yes.  More compliant, yes.  More ignorant, yes.   More compromised, yes.  More miserable, yes.  More mental stagnation, regression and retardation, yes.  Less mental faculty, yes.  Less intelligent, yes.

The history of mankind is replete with such examples and details, and therefore, I will spare you the diatribe.

Moreover, even if you've been living under a rock your entire life - the rock of willful ignorance - all you need to do is to just take a quick glance all around you in order to see what is happening right now, this very second, all around the globe:

Manufactured conflicts by the children of Mephistopheles.   A bunch of little fucking devils spread out all over the planet like a bunch of viruses and a plague upon the earth.  A horde of primitive and barbaric savages, numbskulls, intellectual morons and midgets, ideologues and propagandists, court jesters, virtue-signaling frauds, cowards, fearful and terrified lapdogs and vassals, devious and petty tyrants, insane and bloodthirsty murderers, and grotesque monsters without an ounce of conscience and respect for human life and dignity - all masquerading as great and wise statesmen and women, world leaders, grand viziers, brave leaders, valiant and heroic figures fighting for justice and the rule of law and a rules-based international order, lovers of freedom and democracy, freedom fighters, visionaries, intellectuals, and philosophers of all stripes and persuasions.

Children whose hell on earth and scorched earth policies have already resulted in the beginning of World War III;  and set the stage for a global conflagration which will certainly (NOT "may" or "might" or "probably") engulf the entire world; and result in a devastating Nuclear War that will set mankind so far back that it will take a very long time for all of us to recover from.

We can no longer rely on the vast oceans which once separated one part of the globe from the rest of the world and made some of us feel safe and removed from any apocalypse, cataclysmic disaster or potential human extinction-level event.  Advances in nuclear weapon technology and their means of delivery have reduced such distance to the equivalent of going to the park or going out grocery shopping.

That means, all of us are now in the same boat!   Leader of the World and Unipolar Hegemon is now merely an illusion.

As well, we can no longer rely on the old Cold War doctrine of containment through Mutually Assured Destruction for the simple reason that Nuclear War no longer means the destruction of the entire planet.  Nuclear War now means that anywhere from 500 million to perhaps one billion people will be left to inherit the earth.   The other 7+ billion people will be wiped out from the face of the earth.

That means, YOU will now have to ask yourself this question:   After this coming and inevitable Nuclear War that we are careening toward willingly and blindly, while we have our head buried in the sand, will I be one of the 7+ billion dead or one of the not-so-lucky 500 million survivors who will be left to rebuild this planet?

However, that being said, in our willful ignorance and stupidity, we have left this fateful decision as well as the answer to that question in the hands of our so-called leaders, slavish vassals and compromised lapdogs hiding under the banner of independent and sovereign nations, and pure vermin.

Instead of seeing billions of people marching in opposition to this sort of madness in the streets of every single city and nook and cranny throughout the world,  or using whichever form of alternative expression at their disposal, all we are left to contend with is a group of childish, petty, vile, idiotic, moronic, clownish and despicable group of people on social networks, social media and the mainstream media rooting for one side or another and spewing out whatever propaganda they have been led to believe or the latest childish themes or memes they have been brainwashed to espouse or adopt.   Practically none of us are willing to hold ourselves and our so-called leaders accountable.  For the very few who would like to challenge the narratives of the powers-that-be, they are intimidated and forced to remain silent lest they be willing to suffer the wrath of others.  The lunatics are in charge of the asylum.   Hence the reason why this Nuclear War is inevitable.

Therefore, the bottom line is this:   After painting such a bleak picture of what is to come and the future of mankind :::: it's NOT a matter of if, but when :::: the only options that we (i.e., all human beings) are now left with are the following:

Your mentality:   "Thus, I am willing to discount both the messenger and the message and go on about my life and business as usual."

Your mentality:  "Thus, I am willing to cross that bridge when I get there."

Your mentality:   "Thus, I don't believe that the ideals and  solutions espoused by Pierre Coupet in this document deserve any serious real-world scrutiny, hence, I prefer to proceed in my own direction."

Your mentality:   "Thus, even in the absence of any potential global conflagration, I am willing to do whatever I can that is within my power in order to contribute  to this New Global Civilization of Intelligent Beings which will allow mankind to embark on the road to Human Evolution."

The choice is yours!