Your Choice: A Better World Or a Brand New World? 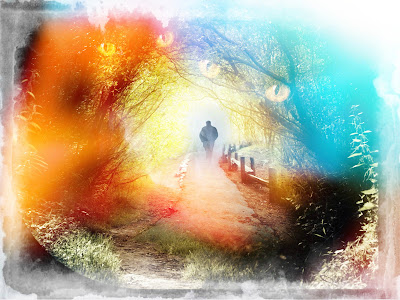 For millions of years, mankind has been engaged in a futile struggle for A Better World - an eternal struggle to make the world a better place.
The dustbin of history is replete with congeries of local and global initiatives, epochal and global movements, epic struggles, fratricidal events, insurrections and revolutions,  regional and world wars (human massacres), the rise and fall of dynasties and global civilizations, and an untold number of cataclysmic events  which have all failed to make a dent toward the accomplishment of such goal.
Although there are millions to billions of reasons for such dismal failure,  the primary reason is this: The pursuit of  A Better World  (i.e., trying to make the world a better place)  is the equivalent of a dog chasing his tail.
As we all know, there is a myriad number of reasons why a dog will engage in such pursuit, however, that being said, the end result is that it accomplishes nothing at all.   The most that a dog could ever hope to accomplish after catching its own tail is to either lick it or chew it in order to satisfy some compulsion or to obtain temporary relief from some ailment.
The bottom line is this:   If the dog lives in an environment that is very confined, infested with fleas and intestinal parasites, rife with all sorts of diseases, and contaminated with poisons and a host of toxic pollutants, then common sense dictates that no amount of tail catching, licking and chewing will solve its problem.
In which case, the question then becomes, "What is the alternative?"   Well, one thing you can be very sure of is that, there will be no shortage of  "renowned experts, geniuses, innovators and visionaries" who will be more than delighted to come up with a myriad number of solutions designed to improve the dog's environment, develop cures for some of these diseases,  reduce the number of poisons and toxic pollutants in the environment, etc. (i.e., To Make the Dog's World a Better Place).
A Brand New World
However, there is One Solution that will escape them all:   A Brand New World.   A new world that is expansive in nature wherein all dogs are free to roam around and play to their heart's content;  free of infestations from fleas and intestinal parasites; free of dog-infecting diseases;  free of toxic pollutants and poisons, etc.
When and Where Do We Begin and How?
Thus, in a real sense, instead of  Trying to Make The World a Better Place, our focus should be on Building a Brand New World.    In which case, the question that we all face is, "When and where do we begin and how?"
The answer is easier said than done for the simple reason that you are NOT going to like the following solution which requires that you USE YOUR BRAIN for the very first time in your life.
Step #1.   Use Your Imagination to Strip Yourself as well as every single other human being on this planet Completely Naked.    Now see yourselves completely Shaven, without any tattoo or other identifying mark on your body, standing out there next to each other in a Wide Open Field and looking out as far as the eye can see.
Step #2.    Now Close Your Eyes and walk in any direction for about 60 minutes (just count up to 3600) and then come to a complete stop.  Don't worry about bumping into a bunch of other people because you are all in the same boat and no one is going to get upset at you or try to hurt you.
Step #3.    Now Open Your Eyes and, as far as the eye can see, tell me what you see.   Do you see:

Step #4.   Now, while you are still completely naked, go ahead and levitate yourself about 5000 feet up in the air and, while looking down below,  repeat the same exercise at Step #3.   What do you see?
Step #5.    While you are still levitating at 5000 feet up in the air,  do you see any separate airspace? Do you see any dividing lines in the oceans and lakes below? Do you see any separate countries?  Do you see any citizens?   Do you see any legal immigrants?  Do you see any illegal immigrants?   If you believe that you have seen some countries,  1) are you sure of that,  and 2) can you tell which countries that the people below belong to?
Learning Outcome of Steps #3 and 4.     You will notice, in the absence of all these bullshit labels and narratives,  that ALL the aforementioned people - every single one of them - are simply Human Beings JUST LIKE YOU.  They have a head which includes a skull and brain, a short neck, wide shoulders, a wide chest which includes a heart and lungs, a belly, a butt; and a set of arms, hands, legs and feet.

What this means is that, besides each and every single one of them being simply another human being just like you, everything else (i.e., all these fucking labels and narratives) is just a figment of your imagination and nothing but a charade, masquerade and pure theater.
Therefore, by extension, extrapolation and inference, this Primitive, Barbaric, Savage, Grotesque and Evil World that we live in today, including all the nightmares and horrors that mankind has experienced since time immemorial,  is a World  that ALL OF  YOU - a bunch of  Primitive And Barbaric Savages ("PABS") -  have willingly created.
And,  to this very day, minute and second,  YOU--yes, I mean "you yourself"--either actively or passively and consciously or subconsciously condone the actions of its Leaders  (a relatively tiny group of  sociopaths, psychopaths, monsters and murderers) as well as actively participate in the brutal enforcement of their rules and mandates.
Thus the reason why no single individual or group of individuals can make this World a Better World.  This cancerous tumor of Evil and Barbarism has metastasized and spread throughout every single organ and fiber of Our World to a point where this world of ours is beyond redemption.  In other words, there is absolutely no available cure for this terminally ill patient.
Moreover, even from a collective standpoint, the whole of humanity will never be able to make this World a Better Place.  For the simple reason that, even if such attempt resulted in a successful outcome, this "Better World" could only give us the illusion of being "Less Primitive, Less Barbaric, Less Savage, Less Grotesque, and Less Evil."   And, if I might add,  just for how long?

No different than the dog chasing and finally catching its tail so it can lick it or chew on it in order to satisfy some compulsion or to obtain temporary relief from some ailment (e.g., boredom, fleas, intestinal parasites, infectious diseases, poisons, toxic pollutants, a toxic environment).  At the end of the day, the problem would still exist and continue to worsen until the dog finally succumbs to these illnesses.

Thus the reason why the promise of a Better World has always eluded mankind.
The history of mankind is very clear.   No amount of mandates, edicts, laws, constitutions, constitutional amendments, feel-good legislation, assassinations, confinements, SIT-INS, PROTESTS, CITIZEN OUTRAGE, GLOBAL OUTRAGE,  MARTYRDOM at the hands of monsters, restrictions on freedom of movement or expression, change in leadership, change in political system, change in form of governance, good intentions, Witch Hunts, Inquisitions, Wars to End All Wars, War to Save Civilization, War to Preserve or Defend the New World Order, War On Terror, War On Drugs,  War On Money Laundering,  War to Gain or Maintain Hegemony,  War of Manifest Destiny, propaganda,  smoke and mirrors, bullshit, lies, repression, oppression, and tyranny can produce the desired effect of a Better World over a sustained period of time.    In fact, over the passage of time, bad things have a tendency to progressively go from bad to worse.
Learning Outcome of Step #5.     You will also notice that there is NO actual physical barrier or division which exists on this planet and that ALL barriers and divisions are strictly mental constructs and purely a figment of our imagination.   When looking down from above at 5000 feet, you can only see One Planet, One People, and One Human Race.   A race which comes in an amazing variety of beautiful color shades - no different than the billions of other creatures who share the planet with us.
A Brand New World Is Our Only Salvation
Now that we know where to begin and how, and have performed the foregoing steps - all within the space of a few minutes,  it is crystal clear to each and every single one of us  that, given a choice, Building A Brand New World is our only salvation.
A new world that is expansive in nature wherein all human beings are free to roam around and collaborate to their heart's content.   A world that is completely free of ALL these stupid, primitive, barbaric, savage and moronic labels and narratives.
Since we now know that all these narratives and labels are strictly mental constructs and purely a figment of our imagination :: and we have the benefit of hindsight gained from millions of years of knowledge and practical experience :: all we have to do now is to become "Reimagineers" of a Brand New Global Civilization.
For those of us who are willing to undertake such mission, that means we will need to take the time to use Our Own Imagination in order to Reimagine Human Existence in this Brand New World that we seek to build.  As well, we need to Reengineer a new Human Reality for all future generations.
Just imagine a Brand New World full of Reimagineers whose mission is to Reimagine and Reengineer Human Existence and Human Reality for not only today's but also for all future generations.  A Brand New World that will herald the arrival of a  New Global Civilization of Intelligent Beings and the Dawn of Human Evolution.
In Conclusion
If, by some sort of miracle or providence, you were able to read and understand this article,  then click here in order to proceed.  Otherwise, share this article with anyone who comes to mind.
Let Us Manifest!