Folly of Visionary’s Frustration In The Land of the Blind, Deaf and Dumb 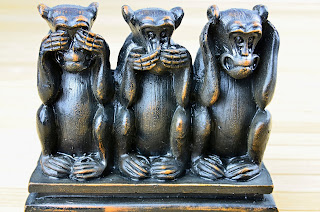 Imagine walking into a room full of people and excited at the prospect of engaging in healthy debates and philosophical discussions about our current civilization and stage of human evolution,  ideas on how mankind can make a giant leap forward toward political and human evolution in order to make the transition from Human Beings to Intelligent Beings.

You’re excited to tell them that once we are able to make the transition to Intelligent Beings, we’ll be able to Build a New Global Civilization based on Principled Geopolitical Leadership, a concept rooted in a new discipline called Virtual Organization Management - pioneered since 1997 -  and the architecture of a Civilized World Financial System.

You’re unable to contain your excitement at the prospect of Building Paradise Here On Earth once we make the transition to Intelligent Beings.   You know that once we’re able to Build Paradise Here On Earth,  we’ll have no choice but to set our sights toward the stars in order to meet our fellow brethren in the multiverse, travel side by side with our Creator, and marvel at the beauty of Creation.

And, last but not least, you are happy to let them know that they don't need to rely on a Savior, Prophet, Leader, Some Superior Intelligence, Investors, or One World Government  to make it all happen and that they are already in possession of everything they need to make it a reality.

After a while, the more you speak and pay attention to their response and behavior, you begin to notice something very strange happening.

You've come to realize that,  in spite of the fact that they seem to be human just like you and you all share the same language, this is just about the full extent of what you have in common with all of them.

Although they have ears, it seems that they are unable to hear a single word you said.   Everything seems to go in one ear and out the other.   So you assume they must be DEAF.

Although they have a brain, it seems that either they are not able to use it, are unwilling to use it, or are afraid to use it.   So, by their actions, you are left with no other choice but to assume they must LACK INTELLIGENCE.

Although they have a nose, it seems they are either unable to smell the stench all around them or have grown accustomed to it to a point where they can no longer smell it.  So you assume they must LACK THE SENSE OF SMELL.

Although they have the gift of speech, it seems they are unable to articulate their thoughts, feelings and anything which smacks of intelligence.   No matter what you say or do in order to engage them in a discussion, it seems they can only say or repeat words that they have been taught and conditioned to say and repeat -  just like a parrot.    So you assume they must be DUMB.

A Race of Primitive And Barbaric Savages ("PABS")

Based on the foregoing observations, you're left with no choice but to come to the realization that you are dealing with a bunch of Modern Day Apes called Humans that are right in the middle of a critical stage of the Human Evolution process.   They have evolved only physiologically instead of mentally and intellectually and it's useless to try to rush Mother Nature.

They are still a race of Primitive And Barbaric Savages ("PABS").   After all,  Our Ape Ancestors didn't all get up one day from their hind legs, stand in an erect posture, and start walking and running.    It took millions of years for that to happen completely for all humans.

The mental part of the Human Evolution process will happen sooner or later and no amount of gene  splicing, slicing, dicing, tweaking or shortcuts can speed up the process.   Thus, it is sheer folly to get frustrated at their progress on the path toward Human Evolution.

If, by some miracle or providence,  you were able to read and understand the content of this article;  and  are either planning or have somehow managed to escape  from the Land of the PABS,  I invite you to introduce yourself   in order to begin this discussion on how we can begin to make the transition from Human Being to Intelligent Being.