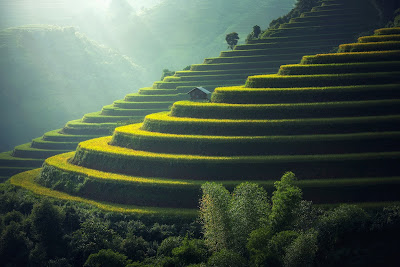 Let's face it, I do not dare to presume to have any knowledge of what it's like to live in any remote village of any Least Developed Country in the world.
However, what I do know is that it is almost impossible for people who live in a box to be able to think outside the box.   Although there are millions of charlatans, clowns, scammers, and con artists all over the globe, including in your very own village, who would endeavor to make you believe that they are able to do so.
Even here in the United States, on just about every social network that you come across, you will find them by the millions, and collectively, billions.  Of course, I've learned how to deal with them effectively without any sort of rancor or the need to engage in polemics.
So let me proceed with the reason why I started out with the "think outside the box" theme.   That's because the box that we all live in is "our own mind."
As I have been sounding out over the past 30 years,

"We are all thoughts and ideas"

"Between birth and death stands nothing but drama,

Generated by pre-programmed thoughts and ideas,

From which no one can escape."

Therefore, the only time anyone can think outside the box is "when they are dead."

Thus the reason why Information Platform Providers ("IPP") are concerned about what sort of information is being disseminated to you from their platform.
The question then is:  How do you go about reprogramming your mind?
The answer is simpler than you think.   Now that you know that every single person around you -  regardless of their title and how much education, wealth, power and privilege they claim to possess -  is programmed :::  in other words, in the same boat that you were in just a second ago; just as blind, deaf and dumb and just another robot and artificial intelligence ::: you can now  start to question every single thing that you have ever thought of, every single thing you have ever been taught,  every single belief you have ever held sacred, and every single piece of new information which comes your way.
Once you start that process,
Then you will come to realize,
Once you have reached that stage,
In the interim,  I invite you to begin your journey with the following information:
In Conclusion
If your very first instinct is to wonder "what kind of insane asylum" did Pierre escape from, that means you are on the right path.
Second, if you are wondering what the hell does this article have anything to do with a "CloudCoin Adoption Strategy" for the "general population" in some of the poorest villages and countries in the world, that means you are still on the right path.
Third, if your first inclination is to say to yourself, "I don't have any time to read all this crap. I got better things to do.  Pierre must be insane," that means you are still on the right path.
Fourth, if in the end you believe that there must be a method to Pierre's madness that you are not now able to see or understand or be privy to ::: and that you have nothing to lose by going on a mental expedition in order to find out what that is ::: then you have taken the first step of a new journey that is bound to take you to places where you have never been before.  That also means that, one day,  in this life or the next, you and I are bound to meet each other while you are going down that road.
Otherwise, just keep in mind that there is more to you and the universe than meets the eye and a closed mind.  You Are A Power of One.
Let Us Manifest!