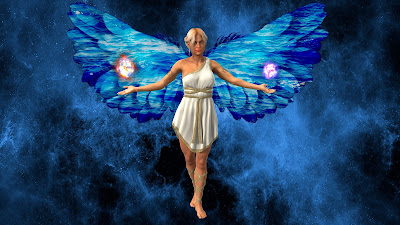 It's that time of the year when 90% of all New Year Resolutions have already bitten the dust.  By the end of this month, these resolutions will all go the way of the dinosaur and become completely extinct.

Why is that?  It's because the person that you are when you first came out of your mother's womb is the person that you will always be until the day you finally cross over into the next world.   The only things that you have control over in your life are "How You Manifest."   "How You Manifest" only means "how you respond to events in your life and around you."  And how we manifest are subject to time, place and circumstances, some of which we have absolutely no control over.

For example, I may have control over what neighborhood to live in, which shopping center to go to, which city to live in, which airline to travel on; however, I have absolutely no control over the world leader who wants to initiate a false flag "terrorist" attack by blowing up an airplane in mid-flight in order to use that as an excuse to declare war, invade and bomb the hell out of the country and neighborhood I live in.

And when the bombs and shells start to drop on my neighborhood (a la Palestine, Iraq, Libya, Syria, Afghanistan, Ukraine, Yemen, Ethiopia, Eritrea, etc.),  how to respond to these events  in my life and around me (i.e., How I Manifest) is the only thing I have control over.   I may decide to either run and hide under the bed:: attempt to cross the border into a neighboring country and live in a refugee camp until the war is over:: join the army and fight back against the invaders::  join the terrorists who are being used to destabilize the country in order to prevent harm to my family members :: or become a lone wolf, etc.

But since you really have no control over events with respect to time, and place and circumstances, and you are only limited to "how you respond to events",  what this means is that "the person that you've always been since the time you first came out of your mother's womb" will ALWAYS have a great deal of influence over you "in terms of  how you respond" to such events (How You Manifest):: and no amount of Resolutions on any given day can change that.

All Is Not Lost

However, that being said, ALL IS NOT LOST!   Although you can't change the person that you've always been (In This Dimension) since the time you came out of your mother's womb, there is, however, Another Dimension that is completely independent of your genetic make-up that each and every single creature or entity in the universe has access to and can tap into.   In that dimension, lies a Supreme Intelligence that, collectively speaking,  WE ALL ARE.   In that dimension, we have no understanding of Fear, Good, Bad, Evil, God, Religion, Races, Ethnic Groups, Genders, Culture, War, Peace, Governance, and all the other primitive and savage concepts, notions, and instincts which characterize all things in the "matter state" dimension.

To discover that dimension, No Training (Religious or Otherwise)  is required.  No Spiritual Guidance is required.   No Chants or Mantras need to be sung.   No Deep Meditation is required.  No Prophet needs to be summoned.  No Rituals or Sacrifices are required.   All you need to do is, CLOSE YOUR EYES for whatever amount of time that you wish,  at which point you can be whatever you desire and you can go wherever you want to go, even to universes that scientists, billions of years from now,  will one day discover.   In that dimension, Time and Space and Life and Death, as we now know it, does NOT exist.

And Once you realize that this power is yours, you will be able to overcome the limitations of this dimension that you now live in:: all the limitations which make you feel "Less Than" or which instill "Fear" in you.   By that I mean, You'll No Longer Fear to Stand Up Because Now You Know You Can Run :: And You Will No Longer Be in Fear of Falling Because Now You Know You Can Fly!

And once you have ascended to the Supreme Intelligence,  you will have no more need for New Year Resolutions!